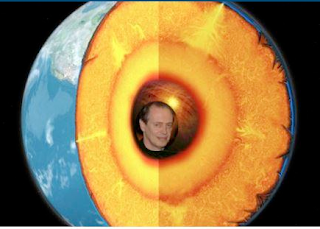 Thank you Reddit, while attempting to find pictures of the earths core, you surpass yourself.

Turns out Steve Buscemi is the centre of the world.

Anyway. Lets start with something I hold to be true. My testing career is mine to shape, it has many influences but only one driver. No one will do it for me. Organisations that offer a career (or even a vocation) are offering something that is not theirs to give. Too much of their own needs get in the way, plus morphing into a badass question-asker, assumption-challenger, claim-demolisher and illusion-breaker is a bit terrifying for most organisations. Therefore, I hope the wheel is a tool for possibilities not definitive answers, otherwise it would just be another tool trying to provide a path which is yours to define.


In part one, I discussed why I had thought about the wheel of testing in terms of my own motivations for creating it, plus applying the reasoning of a career in testing to it. As in, coming up with a sensible reflection of reality as I see it, rather than creating a 'competency framework' which describes some bionic human that no one has ever met, or would even want to meet.

So, in part 2 I thought I would dig into what's contained within. Not in a 'I'm going to define each term' endless navel gazing type of way but in a 'lets look at it from a different angle' way. I have observed people retreating from ownership of their own development as we are forever foisting methodologies, tools, techniques, models, definitions on each other, naming no examples. Testing and checking. Sorry I mean't to think that, not write it.

Anyway, lets break it down a bit. I love a tortured analogy so lets use the layers of our own lovely planet as an explainer: 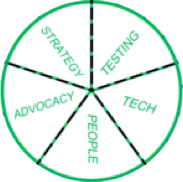 The inner core of the earth is hot, high pressure and fast moving, but dense and solid. Always moving and wrestling with itself but providing a base to develop the self from. I chose these five areas for a core, reflecting my values: 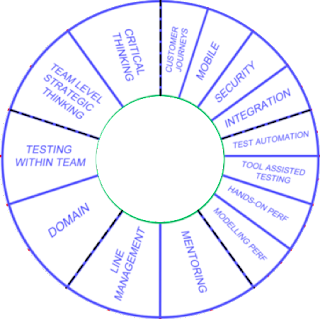 The outer core is where things start to get a bit more fluid and move a bit faster, plus its the middle layer, affected by both the inner core and the mantle. The boundaries get a bit blurrier and navigation is a little bit harder: 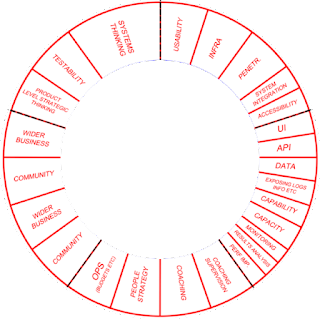 The mantle is a weird place. Almost solid near the surface, extremely fluid and fast moving nearer the outer core. Similarly, a lot of the aspects of the wheel here seem quite specific but underneath the surface you start to realise how they are all part of a very complex entity:


So what about the crust you say? Thats the shallow layer that we usually need to break through in order to really start to question what we are made of. And just remember this. Once you've been at it for a while, it can be a long and treacherous journey back to your core...

After much anticipation, myself and three of my colleagues embarked on the Software Testing World Cup journey in the European Preliminary. We had prepared, strategised, booked rooms/monitors, bought supplies and all the other (actually quite long list) of tasks to get ready for the big day. Armed with the knowledge that I would be jetting off on holiday the following day, we entered the (metaphorical) arena to give it our all and hopefully have a little fun. Here are my thoughts about 3 interesting (exhausting) hours. When I reflect..... Over my testing career, I have learnt to really value time to reflect. Study a problem, sleep on it, speak to peers for advice, come up with an approach. The time just doesn't really exist (in the amount that I needed it) during the competition, which made me uncomfortable. A little discomfort can teach you a great deal, and indeed amplified the more instinctive part of my testing brain. Following on with the above, I'm happy 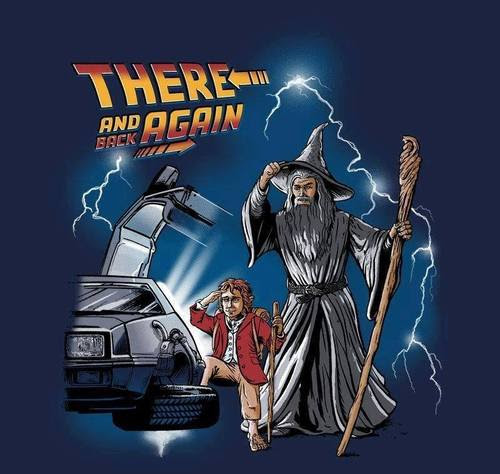 Why do Testers become Scrum Masters?

It was late and I was stuck on a train, so I pondered on the question of why do testers often (in my experience) become Scrum Masters. Its a very dear question to me, as its been a big part of my career journey In fact, I've been there and back again. Tester to supposed-to-be-testing-but-being-a-Scrum-Master to Scrum Master, back to Tester and very happy thank you. I encapsulated my reasoning in the following: Long train delay, decided to think about a thing. :) Why do testers (in my world anyway) often become Scrum Masters? #testing #agile #scrum pic.twitter.com/FGGXFiBGz1 — Ash Winter (@northern_tester) February 13, 2018 The tweet got a lot of traction, and generated a couple of interesting threads which made me think. Great list. Personally I think that as a scrum master I can add even more towards the goal of quality. — Christian Kram (@chr_kram) February 13, 2018 Perhaps part of the reason for the transition is a growing appreciation of where quality has its

How to advance your test automation skills with source control

If you're a tester who wants to get up to speed on coding to become a test automation engineer, don't just start learning to code; start by learning about source control, a methodology for tracking and managing changes to your code.  In my recent past, testers at one particular organisation I worked with were busy creating test automation and even tools to manage test data and application state. All the application code was in source control but none of the code written by the testers was in source control. It was zipped and emailed, copied to shared file servers, sent by instant message to name a few sharing mechanisms. Versions diverged wildly, valuable code was lost or overwritten leading to delayed testing, panic rewrites of tools, all round disarray! Without source control, software developments teams will essentially be in a state of chaos, terrified of code change. I often meet testers without access to their teams source control repository. If this describe yo